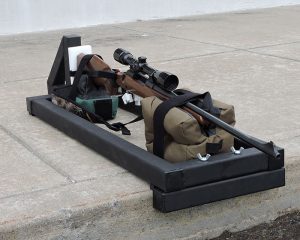 The neurological effects of high impact sports on the brain has been an increasingly emphasized topic of research. Approximately 1.6-3.8 million concussions occur in the United States every year, a majority of which occur from playing high impact sports such as football. However, the effect of the usage of firearms in the military and competitive shooting sports has been neglected in most studies regarding traumatic brain injuries. Jon Sinopoli, a student in Burnt Hills, NY, developed a method to examine the force and acceleration of different caliber firearms to identify if they can cause concussive forces to the user. This research has the potential to shed light on health risks of repetitive firearm usage that were previously not characterized or taken into consideration in current firearm guidelines.

Jon designed and built a testing apparatus utilizing MCC data acquisition hardware to measure the amount of recoil from a firearm, and developed a DAQami program to record and analyze the force and acceleration of five different firearms of varying calibers. 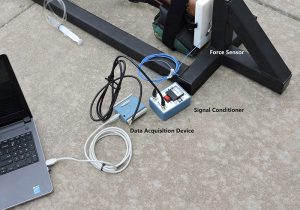 Jon’s original prototyping revealed the need for a data acquisition device with a higher sample rate, and the USB-1408FS allowed him to sample at 10kS/s without being cost prohibitive compared to other devices in the market. A force sensor and tri-axle accelerometer connected to the USB-1408FS recorded the recoil force of the firearms and the acceleration of the user’s head. Using this information, Jon concluded that four of the five firearms tested generated enough acceleration to cause a concussion even with the reduction in acceleration by the human body.

To read more about Jon’s research project, check out his full research paper.

Sign up to receive email updates and to hear what's new at MCC!

AT MCC WE CARE ABOUT YOUR SUCCESS

Whatever your data acquisition and data logging needs, MCC provides high-quality hardware and software products at a great price. MCC will provide a data acquisition product that is easy to use, easy to integrate and easy to support, all with a 30-day money back guarantee.